I passed the last few days listening cynically to the warning stories of the coming “Frankenstorm” in the northeast.  Joseph tends to be a little more cynical than me; he thought it was a bunch of media hype guaranteed to spur watching of the bazillion news channels.

It sounded as though it could develop into something pretty bad as time went on, so I started paying more attention. Joseph is from Brooklyn, and worked in lower Manhattan for years. We have family on Staten Island and in Jersey, and many friends in metropolitan New York City. 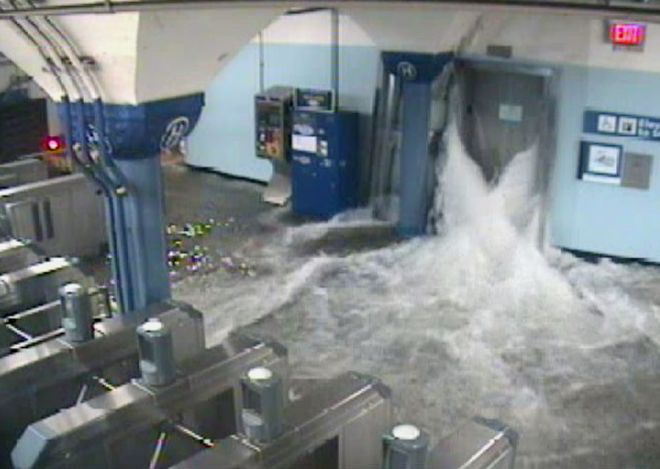 When the waves started crashing over the promenade in Battery Park City, I started to freak out. Then the photos of water rushing into the subways, and the ConEd station on FDR Drive and E. 14th Street blowing up.

As I write this, I’m watching over Frenchmen Street, seeing the preparations for one of the most raucous holidays in New Orleans. There’s a bearded guy in a black fright wig and a green satin colonial dress who’s smoking a cigar and drinking a beer whilst walking across Frenchmen Street. The gutter punk kids, who clear out of New Orleans when it gets too hot in the summer, are back in full force for Halloween (they don’t need costumes).

In a city that lives for parties, Halloween is a really big deal. I just hope that our friends and families in the northeast and the New York city area without power, transportation, who have lost their homes and property—to say nothing of lost loved ones—can have a little peace this evening.

The news media says it will be four to five days until New Yorkers can expect to have power restored, but who knows how long it will take before the city’s transportation system is restored.

John Swenson and his wife are “stranded” in New Orleans. They were going to return to their home in Brooklyn today, but reportedly, until the subways can be repaired, the airport can’t open either. I truly feel for you guys in the northeast: been there, done that. Our prayers are with you.

The self-appointed “noise police,”  (the few, vocal and well-heeled residents of the French Quarter—and now the Faubourg Marigny—who don’t want music in their neighborhoods), are still pursuing legal action against their neighbors who present live music. Stuart H. Smith, the wealthy plaintiff attorney who has filed many a lawsuit on behalf of the noise police, is continuing to attempt to shut down music in the Market Café (it’s had live music for about 30 years; the lawsuit issues started after Smith moved into 516 St. Philip in 1997 and was disturbed by the music). Smith, who has made boatloads of money in class action lawsuits against giant corporations like BP, has filed suits on the behalf of client Peter Yokum against Pat O’Brien’s and other bars.

Smith is now involved with representing a potential client in pursuing Mimi’s in the Marigny, which ironically has sound abatement in their windows and conducts noise checks to make sure decibel levels don’t exceed city ordinances.

Could shutting down music in the Market Café also have a negative impact on music in the Quarter in the French Market? Could Frenchmen Street be next? (Smith has already worked with a resident on Esplanade who complained about the music from BMC on the corner of Esplanade and Decatur). Is St. Claude Avenue net? Oak Street? Freret Street? Please tell me, is this video shot at the Market Cafe noise?

Will the 1% be able to essentially shut down what 99% of the population overwhelmingly desire—music on the streets of New Orleans? I don’t understand how this fight against music continues in the city; it’s quite obvious that the majority of residents who live in these areas are pro-music. So why do the very few—who have the services of a well-connected,  well-financed lawyer who has engaged a high-powered public relations practitioner—manage to prevail in capturing the attention of the mainstream media and City Councilman Palmer to stop music?

This, to me, is a perfect example of wealth’s power influencing political and community issues contrary to what the majority of the population desire; it’s the epitome of an anti-democratic process. It seems to me that democracy means that the people deserve to be heard—whether they can afford to pay an attorney or not.