Everyone needs inspiration. Sometimes when life gets tough, it’s that little bit of hope that keeps you going. Sometimes it comes from totally unexpected places.

I learned this in spades when I was only 28 and was involved in a car accident that almost ended my life. I was a senior at the University of New Orleans at the time, and had about nine hours to complete until I graduated. My major was Hotel, Restaurant and Tourism Administration (affectionately known around the UNO campus as “HRT”), and I was working as a bartender to complete some internship hours. Yes, those are the kinds of internships that are available for HRT students—you have to learn how to manage a bar and determine the hundreds of ways that unscrupulous bartenders can rip off management.

In mid-April, driving home from the job one evening on the interstate, I was hit head-on by a drunk driver who was speeding at 90 m.p.h. and crossed the median on the highway. The crash happened so quickly that another car behind mine crashed into the rear of my car. So I was hit from the front and the back. It was a terrible accident.

I’m lucky to be alive and writing this, and enjoying my life and family (albeit with a lot of orthopedic issues that are minor compared to being paralyzed, or dead).

But I was young at the time. I had a young daughter to support, no job and no money. And, of course, my dream of getting a degree seemed to evaporate overnight. Luckily, I had catastrophic health insurance, which helped pay some (but not all) of my massive medical bills, and a family and friends who rallied around me while I slowly recovered.

It’s almost impossible to tell you about how bleak and dark those days were, while I was confined to a hospital bed for over seven months, unable to move, or take care of myself, and wondering what the rest of my life was going to be like. After the initial shock of understanding the extent of my injuries, it took a while for me to realize that I might never walk again. As I said, I was also young, involved in a disintegrating relationship, worried about my daughter, and had no prospects for a job. I became profoundly depressed. It took everything I had not to break down in tears most of every day (and often I did).

I can remember very distinctly that a friend of my mother’s—Miss Margie Tranchina—came to visit me. She was a very religious lady, and always cheerful. Not being a very religious person myself, and being pretty depressed at the time, when Margie tried to cheer me up by telling me that “God had a plan for you, and it just wasn’t time for you go,” at the time, I barely listened. All I could think of was, “What do you know—you’re not the one who’s in this bed who’s been crippled!”

But her words stuck with me; they do to this day, and they provided me with a smidgeon of hope that maybe I wasn’t finished quite yet, and that my life could possibly headed in a different, better direction. 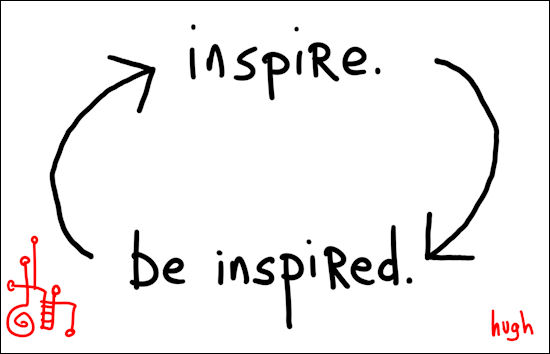 Boy, was that true. I turned around my attitude and picked myself up and decided I was not going to let my injuries keep me from doing what I wanted to do. My family, especially my mother, stuck by me as I struggled to rebuild my life.

Something similar happened when I started the magazine, which went through years of financial hell. My family and friends encouraged me to make my dream come true; they loaned me money; they gave me moral support. And it paid off.

After Katrina, when I thought the magazine would go under, we were buoyed by financial support from our subscribers; but an even bigger inspiration came from these people who love our music and our magazine’s work, and who gave us the moral support and hope that we could survive such a terrible catastrophe.

So inspiration comes from the most unexpected places, at the most unexpected times. But we all need it.  It’s up to the rest of us to provide it to those who need the “juice” to pursue a dream or to raise themselves up from a dark place. I am such a lucky person to be able to get inspiration not only from our readers and from the music community that we serve, from our advertisers and from our writers and contributors. Music—and the people who love it as I do—has healed me and continues to inspire what we do at OffBeat.  We hope we’ve managed to inspire you as well.