The Intergalactic Krewe of Chewbacchus rolled its 2020 Mardi Gras parade on Feb. 1. Photo by Kim Welsh

Carnival is a season of explosive color and joy and celebration and there’s no parade to kick off the festivities quite like Chewbacchus. A walking parade, the floats and throws and costumes are within hands’ reach.

Politics and gymnastics and fuschia fantasy characters are all part of the jumble of adults wrangling their children, while other adults stay busy, accessing their inner child.

I found myself shy about grasping for throws but one particularly quiet boy insisted on placing a mini bulbasaur in the palm of my hand and that talisman became as sacred as any empowered relic, keeping me brave throughout the night. Februarys have taken me away in the past, so this was my first Mardi Gras parade and, while intimidating, I’ve never felt more in love and more embraced by the culture of this city.

The Intergalactic Krewe of Chewbacchus has described its mission as “saving the galaxy by bringing the magical revelry of Mardi Gras to the poor, disenfranchised, socially awkward and generally weird masses.” In my gratitude, I will admit, I check a few of those boxes.

The evening served up an unending combination of brilliant and cringe-worthy puns like: “STOMP Troopers,” “BAR2 D2,” “Darth Star Steppers,” “Cirque du Force,” “Queer Eye for the Scifi,” “Honey, I Blew Up the Kingcake Babies,” “Krewe of Sharknadeaux,” “Illuminaughties,” “Back to the Fuschia,” “Disco Death Star,” “Avatarilicious,” “The Empowered Strike Back” and “Chew-Bake-Us.”

Each one of the Krewes had its own mission, its own personality, its own flavor of camaraderie. The gymnastics were thrilling. The dancing was contagious. With emblazoned phrases like, “The future of the galaxy is female,” revelers were able to march their opinions proudly without taking away from anyone else’s fun. Chewbacchus was not just for the ChewbacchanALIENs– it was for all of us.

Check out photos of the parade, taken by Kim Welsh. 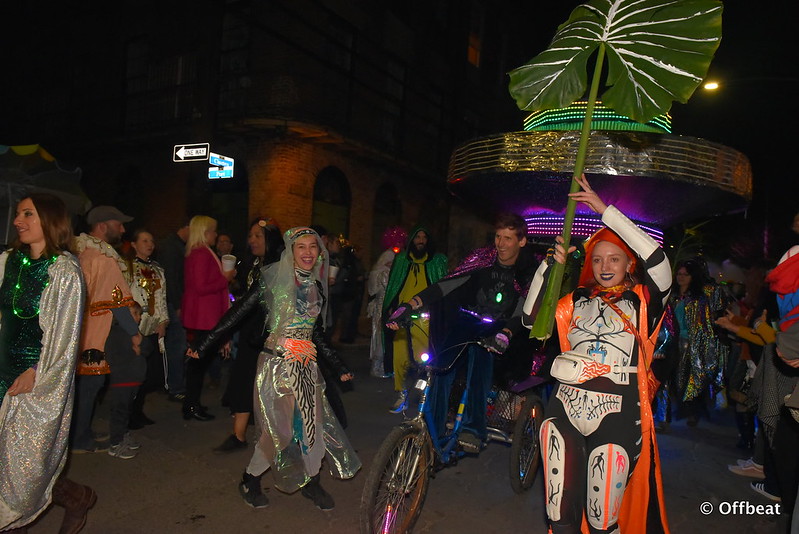