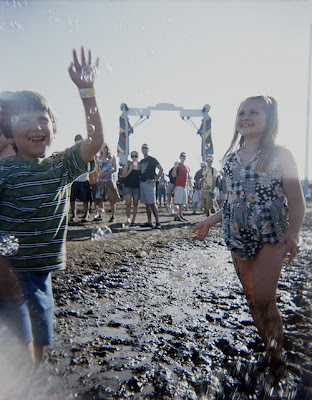 I cannot believe the weather this week—in between Jazz Fest 2010 weekends. It has been so lovely—just more of those picture-perfect days in New Orleans. Am hoping and praying this continues through the upcoming weekend, since opening day of Jazz Fest was a real monsoonesque bummer. It’s a damned good thing I had my heavy-duty wheels with me, or I’d never have been able to motivate out of the mud.

Last week I was on a roundtable discussion that was put on by the Louisiana Office of Tourism, starring our soon-to-be-ex-Lieutenant Governor (mayor-elect Mitch Landrieu) during the opening hours of the Fest, as it turned out, right before the deluge.  The key question was how we improve the music and cultural industries while maintaining their authenticity and appeal. It’s a hard question to answer. (Alex Rawls touched on it in his blog). What we have is so unique, that if we screw with it, make it more commercial and mainstream—in other words, tie it more to money-making rather than cultural expression—we could ruin it. Some very deep research is going to have to take place to find models in other cities and countries before anyone can solve this equation. Am hoping Mr. Landrieu will surround himself with the right people to create a positive solution to this paradox. How do we keep our music and culture authentic and true and at the same time make money from it? Difficult questions, to be sure.

My Fest experience this past weekend focused mainly on Sunday, and without a doubt, my favorite performance was Juan Luis Guerra y 440 at Congo Square, which is pretty much my favorite stage at the Fairgrounds. OMG. These guys were just incredible, and they definitely made my day. This was a group that I’d never heard before and that I’m unlikely to hear again, which made the experience really sweet.

Terence Blanchard said something at our roundtable that I found right on point:  one of his musicians described New Orleans as “a city of moments.” That is so true, when you think about it. Time spent in New Orleans produces such strong, fine, vivid memories—not only in people who live and want to stay here, but the visitors who come here—that it’s hard to divorce yourself from the warm feelings you have for this city.

I suppose that’s one reason why our citizens have a hard time leaving. Even if they migrate to the suburbs, they still come back to New Orleans. There’s just no place like it. Warm and fuzzy abound during Jazz Fest, for sure.

Yesterday evening, the OffBeat staff took off early to run down to dba’s 10th anniversary party. There were free crawfish with all the accoutrements, Jeremy Lyons and the Deltabilly Boys played, people were dancing and laughing. It was one of those New Orleans “moments.” Joseph and I headed back to the office to go home, and we run into Mike Priebe, an OffBeat subscriber from Cleveland, who was in town for Jazz Fest. Both weekends. He was telling us how hard it is for him to go home. Yeah, we know how lucky we are, Mike!

I haven’t mentioned Tremé for a bit, but I have to tell you, I am so hooked on that show. It’s a kick and a thrill to be able to recognize friends who have bit parts, and to watch the characters that are based on people I know well, but it’s also gratifying to finally see a broadcast show that gets it so right. I loved the juxtaposition of Dr. John recording “Indian Red” (and admonishing the players to play it so it pays tribute to the real Indian tribes) and the last sacred ritual of “Indian Red” at the close of the show. “It’s not so much advancing the story line,” says my friend and OffBeat writer John Swenson, “it’s more poetic.”

The show is just  freakin’ cool and represents the world I live in perfectly. If the public digs this show, maybe it’s a great example of how we can keep our authenticity and help our cultural standard-bearers not only make a living but to get the warm fuzzy feeling of respect as well.